Welcome!
Close
Would you like to make this site your homepage? It's fast and easy...
Yes, Please make this my home page!
No Thanks
Don't show this to me again.
Close

This page is, at the moment, a quick data and reference source under construction on 10/26/2016. It shows copies of important data that might be altered with time, and as such it serves for the moment as a record of what was online early in our investigation.

A black smudge on the face of Mars: All that's left of Europe's lander after re-entry ends in fiery explosion on planet's surface.

By Libby Plummer and Abigail Beall For Mailonline

Nasa has pinpointed the location of the ESA's lost ExoMars lander.

New data from the American space agency's Mars Reconnaissance Orbiter has identified new markings on the surface of the red planet that are believed to be related to the Schiaparelli lander's possible crash.

ESA believes that it may have exploded on impact.

The probe entered the Martian atmosphere at 15:42 GMT (10:42 ET) on 19 October for its 6-minute descent to the surface, but contact was lost shortly before expected touchdown.

Scroll down from video

Data recorded by its mothership, the Trace Gas Orbiter, is currently being analysed to understand what happened during the botched landing.

Images from the Mars Reconnaissance Orbiter (MRO) took pictures of the expected touchdown site in Meridiani Planum on 20 October.

A new image released today shows two new features on the surface of Mars when compared to an image from the same camera taken in May this year.

A release from the European Space Agency about the finding is cautious in its language, never spelling out the possibility that the Schiaparelli lander is permanently offline. A small bright patch appears to be the lander's parachute and heat shield, and a larger dark spot, roughly 50 feet by 130 feet, could be the cloud of Schiaparelli's impact. Without active thrusters to slow the descent, the ESA estimates that the lander approached the surface of the planet at a speed of over 180 mph. There is only so much careful language that can obscure an assessment like this: “It is also possible that the lander exploded on impact, as its thruster propellant tanks were likely still full.”

Europe’s ExoMars Trace Gas Orbiter made it to its final destination in full working order, unlike its land-bound companion. Scientists will use photos of the crash site and data relayed from the crashing lander to the orbiter to figure out what went wrong in the landing.

Since the module’s descent trajectory was observed from three different locations, the teams are confident that they will be able to reconstruct the chain of events with great accuracy. The exact mode of anomaly onboard Schiaparelli is still under investigation.

If the lander is truly dead, as its scattered parts on the Martian surface seem to indicate, there is still science to do in learning how, exactly, it happened, and how to ensure ESA's Mars rover, launching in 2020, doesn't meet the same fate. Science is an iterative process, and for every great leap for humankind, there are several other, less successful hops, and even some tragic fumbles, that we had to learn from first.

The hazardous task of fuelling Schiaparelli, the ExoMars 2016 entry, descent, and landing demonstrator module, has been safely completed at Baikonur. The module now has sufficient fuel on board to power the thrusters it will use while descending through the Martian atmosphere in October this year.

The 600 kg Schiaparelli module is equipped with nine thrusters, clustered in groups of three. These will be activated about 1.3 km above the surface of Mars to slow the spacecraft down to less than 2 km/h when about 2m above the surface. At this point, the thrusters will be switched off and the module will drop to the ground.

The thrusters are powered by hydrazine, and the hazardous task of filling the fuel tanks with this toxic fuel and the successive pressurisation of the propellant tanks to launch pressure was completed on Sunday evening, by a dedicated team from Thales Alenia France who are in Baikonur specifically to take care of fuelling the module.

There are three 17.5 litre (4.623011 gallon ) tanks on Schiaparelli. Each of these was filled with about 15 kg (33.0693 pounds) of hydrazine. But hydrazine on its own is not sufficient and the spacecraft also needs helium for its pressure regulated propulsion system to function.

A high-pressure helium tank on the module had been filled with 15.6 litres of helium and brought to flight pressure (at approximately 170 bar pressure) before the hydrazine fuelling. This helium is used to pressurise the propellant tanks and bring the propulsion system to the correct operating pressure.

Fuelling operations began on Thursday when Schiaparelli was moved from the clean tent area of the cleanroom, where it had been for the other preparatory activities, into the dedicated fuelling area. Preparations and safety checks were carried out on Friday and the actual hydrazine fuelling was done on Saturday, taking about two hours to complete the fuel transfer. On Sunday, the system was brought up to launch pressure, and by Sunday evening Schiaparelli could be declared to be fully fuelled and was ready to be brought back to the main cleanroom.

The fuelling team will be busy for another few days as they take care of decontaminating the fuelling equipment so that it can be transported back to Cannes.

Now that Schiaparelli has been fuelled additional safety precautions will be implemented for all activities that are carried out in the vicinity of the module.

In practice, the presence of the hazardous fuel onboard Schiaparelli means that anyone working close by will need to carry a gas mask and wear an anti-acid protective suit. All personnel working in the cleanroom have had special safety training for what to do in case of a declared emergency, and as an additional safety measure, hydrazine detectors will be placed around the spacecraft.

Loss of the lander

The Schiaparelli lander attempted an automated landing on 19 October 2016, but the signal was lost unexpectedly a short time before the planned time of the landing.[4][26] ESA's Mars Express and NASA's Mars Reconnaissance Orbiter (MRO) and MAVEN listened for the lander's signal.[4] Initial analysis of returned telemetry (600 megabytes of data[27]) suggests that the heat shield and parachute deployment worked as expected, but the parachute was released too soon. In addition, the subsequent rocket thrusters firing lasted about 3 seconds instead of the expected 30 seconds, so a soft landing appears not to have occurred.[28][29]

The parachute should have released at an altitude of 4,000 feet before thrusters fire to slow the craft down from 150mph to 2.4mph so it can land gently. But data suggested the parachute had been jettisoned too early, before the probe had slowed sufficiently. Although thrusters did fire to slow the descent, they did not burn for as long as expected which could also have left the craft hurtling towards the ground at high speed.

In Nasa's 1999 Mars Polar Lander mission the retrorockets fired too early at the same stage causing the spacecraft to crash land.

Mr Acoomazzo said it was ‘definitely a possibility’ that the probe had been accelerating too fast as it hit the surface.

“The data have been partially analysed and confirm that the entry and descent stages occurred as expected, with events diverging from what was expected after the ejection of the back heat shield and parachute,” he said.

“This ejection itself appears to have occurred earlier than expected, but analysis is not yet complete. That’s definitely a possibility (that is was accelerating too fast).

“It could be that these parachute phases has been terminated too early then we were far too high, or we have a behaviour that has led the lander to be far too low.

“We saw the thrusters fired for a few seconds, but much shorter than we were expecting. We can’t say if they all fired but we will be able to see that in the coming weeks.

Oct 25, 2016: NASA states ,"Exactly what happened to the Schiaparelli lander is not yet known. ESA scientists hypothesize the module crashed when its thrusters were turned off prematurely. Instead of floating to a soft landing using thrusters, the lander dropped up to 2.5 miles at a speed of 184 mph (296.119 km/h). If the thrusters were not operational, then the module would have crash landed with a full load of fuel. The fuel would have exploded on impact, producing the large cloud of surface debris that was seen on the MRO footage. Read more: http://www.digitaltrends.com/cool-tech/esa-exomars-lander-explosion/#ixzz4O6TvtQAd Follow us: @digitaltrends on Twitter | digitaltrendsftw on Facebook"

The parachute system design is driven by the limited altitude between where the probe decelerates to a Mach number compatible with parachute deployment (Mach below 2.1 and a maximum dynamic pressure of 910Pa) and the surface – as little as 5 km. The reaction control system ensures final velocity control to provide safe and robust lander release conditions. The RCS definition is closely linked to the parachute capability and Descent Module GNC strategy. Descent velocity is optimized at 45 m/s (100.662 mph or 162 kph). The RCS GNC performance is characterized by its high throttle modulation capability and low response time. The system relies on 4 Aerojet MR-80B engines fed by hydrazine with a He pressurized system. 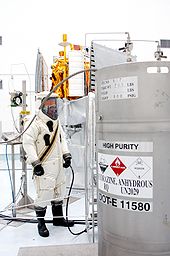 Anhydrous hydrazine being loaded into the MESSENGER space probe. The technician is wearing a safety suit.

Hydrazine was first used during World War II as a component in rocket fuel mixtures. A 30% mix by weight with 57% methanol (M-Stoff in German) and 13% water was called C-Stoff by the Germans.[16] The mixture was used to power the Messerschmitt Me 163B rocket-powered fighter plane. Hydrazine was also used as a propellant with the German high test peroxide T-Stoff oxidizer. Unmixed hydrazine was referred to as B-Stoff by the Germans, a designation also used later for the methanol/water fuel for the V-2 missile.

Hydrazine is used as a low-power monopropellant for the maneuvering thrusters of spacecraft, and was used to power the Space Shuttle's auxiliary power units (APUs). In addition, monopropellant hydrazine-fueled rocket engines are often used in terminal descent of spacecraft. Such engines were used on the Viking program landers in the 1970s as well as the Phoenix lander and Curiosity rover which landed on Mars in May 2008 and August 2012, respectively.

In all hydrazine monopropellant engines, the hydrazine is passed by a catalyst such as iridium metal supported by high-surface-area alumina (aluminium oxide) or carbon nanofibers,[17] or more recently molybdenum nitride on alumina,[18] which causes it to decompose into ammonia, nitrogen gas, and hydrogen gas according to the following reactions:[19]

Reactions 1 and 2 are extremely exothermic (the catalyst chamber can reach 800 °C in a matter of milliseconds,[17]) and they produce large volumes of hot gas from a small volume of liquid,[18] making hydrazine a fairly efficient thruster propellant with a vacuum specific impulse of about 220 seconds.[20] Reaction 3 is endothermic and so reduces the temperature of the products, but also produces a greater number of molecules. The catalyst structure affects the proportion of the NH3 that is dissociated in Reaction 3; a higher temperature is desirable for rocket thrusters, while more molecules are desirable when the reactions are intended to produce greater quantities of gas[citation needed].

Other variants of hydrazine that are used as rocket fuel are monomethylhydrazine, (CH3)NH(NH2) (also known as MMH), and unsymmetrical dimethylhydrazine, (CH3)2N(NH2) (also known as UDMH). These derivatives are used in two-component rocket fuels, often together with dinitrogen tetroxide, N2O4. These reactions are extremely exothermic, and the burning is also hypergolic, which means that it starts without any external ignition source.[21]